We’ve just had some pictures through from our agent of our property in Montevideo. It’s almost complete. The builders have put in the stairwell, the carpenters have sanded and finished the wooden floors, and the heating engineers have put in the cast-iron wood-burner. The carpenter has also added a few kitchen cabinets, but generally when Uruguayans move into an apartment, they bring everything with them, not only appliances but even the boiler. 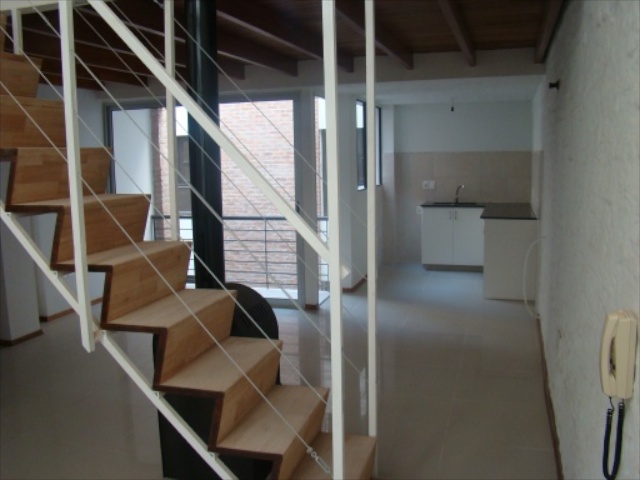 View from the lounge of the staircase and wood stove, looking toward the kitchen (right) and balcony (left).

Apart from the upstairs bathroom and the stairway to the roof, the mezzanine level is completely empty. On the original plans, there were two bedrooms and a small hallway here. We asked the architect to skip all the internal walls and just leave the mezzanine open-plan. He looked worried. “But,” he argued, “you’ve paid for a two-bedroom house, and you’ll only have a one-bedroom house. And Uruguayans don’t want their bedrooms to be so big!”
After we pointed out that we didn’t care about either of those arguments, a big grin spread over his face, and he agreed that it would look much, much better the way that we wanted it.

The roof-top terrazza is almost finished, it just needs some cleaning up and some plants and furniture to make it liveable.

The rooftop terrazza. Stairway to mezzanine to the right. Parilla on the left.

Although this was never intended to be an investment property, we do recognise that it will be some years before we are in a position to move in, and we don’t want to leave it empty. The apartment is (sadly) almost ready to rent.