We are in the middle of buying a renovated apartment in Uruguay, and the word came through just as we were to set sail that the work has been finished and the second half of the payment was now due. We rarely need any excuse to visit Montevideo, so we popped over for a week to check it out.

You can’t fly direct from Australia to Montevideo, but Qantas have recently made it a little easier by flying direct from Sydney to neighbouring Buenos Aires; as well as bypassing the traditional stopover in Auckland, it means that we can avoid flying the execrable Aerolineas Argentinas, which is always a good thing.

The plane was overbooked, and Bronwyn ended up in a luxurious Premium seat whereas I got squashed into the back of the plane in Tourist class, but luckily I was flanked by some similarly skinny guys none of whom showed any interest in telling me their life stories, so we all had a reasonably painless trip.

Buenos Aires
People keep telling me how BA is wonderful and exciting, but I’ve never seen what all the fuss was about. Since we were flying Quantas, we did manage to avoid the awful Aerolineas terminal, and since we had decided to take the ferry to Montevideo rather than the plane, we also skipped the painful cross-city transit to the domestic airport, with its attendant shouting at corrupt taxi drivers and endless baksheesh and idiot taxes.

Instead, following local advice (thanks, Patricia) we booked a bus ticket with the Manuel Tiende Leon bus company, generally accepted as the only reputable organisation to operate out of BA airport, and were painlessly deposited at their depot close to the ferry terminal.

The period of calm allowed me to get a good close look at the city that we were driving through, and everything that I saw simply confirmed my earlier impressions: the city consists mainly of crumbling and stained concrete slums, a vista of washing lines strung across dirty rooftops, buildings festooned with wiring reminiscent of Shanghai, and every available space densely packed with what seem to be military early warning aerials. 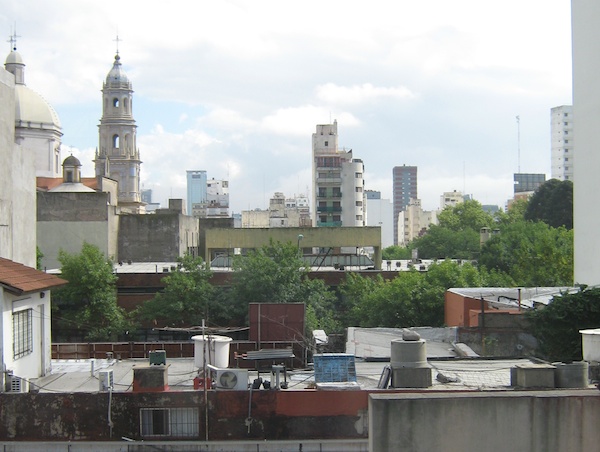 Classic buildings sticking up through the modernity 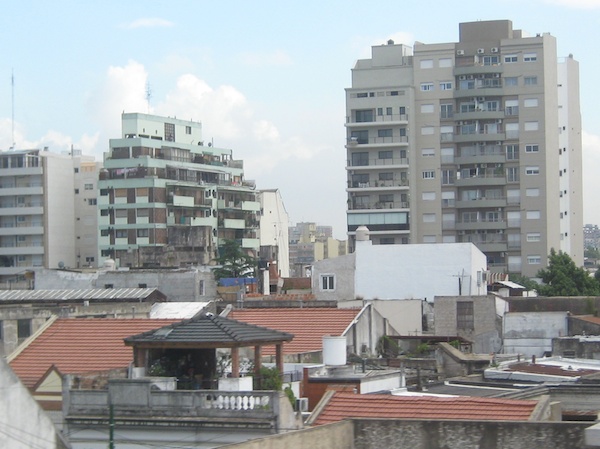 The view from the bus on an overpass

I’m sure that there must be a nice side to the city, but I haven´t seen it yet. Maybe when we live in Uruguay we’ll pop over like everybody else for our evening’s entertainment in the big city, but in the meantime I think that we’ll just keep on passing through…