I came across a wonderful opportunity to train as a postman, which is a job that I have always thought that I would enjoy. For non-Australians, you need to know that postmen here do their rounds entirely by motorcycle, riding directly to each houses letterbox across lawns and kerbs and pavements. Its a subsistence-level position, but all you need to qualify is a clean motorcycle license and no criminal record, and you get to spend a lot of time outside making people happy.

I duly started the training course, which included two interesting days being introduced to the “postie bike”, which is made specially by Honda for Australia Post. At heart it is a CT130 step-through, but it has some interesting refinements, including side-stands on both sides, a hand brake, and a clutchless gear box that will idle in any gear. We had to pass a number of tests, including U-turns in deep sand and negotiating driveways, kerbs and foliage in order to access letterboxes in high and low positions.

There were ten of us in all, from a variety of backgrounds, but about half of us were grizzled veterans of some other business who were looking for a job that was more fun and involved less idiots. Following extensive weaving-in-and-out-of-the-cones, and after some slight problems mastering emergency stops using 1970s-style cable-and-drum brakes, we all passed the test. 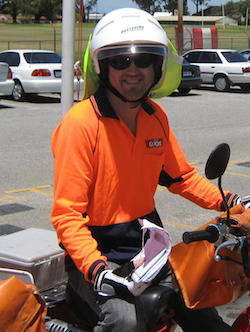 The job itself is simple but fun. I arrive each day at 6 am and start to sort my letters into the 1200 or so addresses on my route. This can take anything from three to six hours, depending largely on whether it is a bill or magazine day for one or more companies. There are dozens off us packed into a large warehouse, all doing the same thing, and the jokes and ribaldry fly thick and fast. 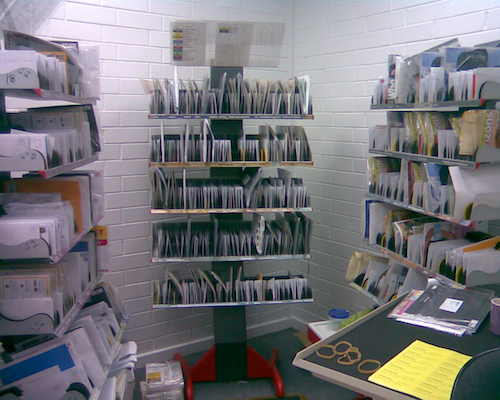 Then I load my motorcycle with as many letters as it can carry, and put the rest of them in a van which will leave them at a drop somewhere on my route. Off I potter to my first drop, and then I follow the same route every day, getting slightly faster with every daily iteration.

Australian letter boxes are not typically attached to houses, they are mostly some kind of box or structure at the end of the garden, at least theoretically accessible by motorcycle. We are permitted to ride on the pavements and verges and, depending on where the builders (in their infinite wisdom) decided to put the darn thing, often find ourselves riding in deep sand, gravel, bark chippings, flower beds, freshly rolled lawns, and so forth. The idea is to not actually ride on peoples’ lawns if we can help it, but as often as not I find myself approaching a pristine turf of bowling-green calibre, in the very centre of which has been built a letter box. It’s summertime at the moment, and my bike treads lightly; it will be interesting to see what happens in the rain.

You’d think that there would be some regulation size or position for a letter box, but there is not. Unfortunately this means that a great many of them are completely unsuitable for the delivery of mail, whether by motorcycle or otherwise. Its not just the physical location, although some of them are built at ankle-height which makes for some interesting gymnastics. No, the real problem is that for some reason that is buried in history, the default slot size chosen by almost all builders is about one brick wide and a couple of millimetres shorter than the width of a standard business-letter envelope. By far the greater number of these small boxes are built into a wall, so there is little chance of ever fixing the problem. 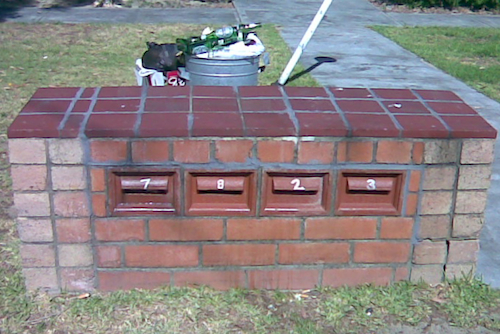 The structure pictured here is typical of the breed (note also the excitingly random distribution of house numbers on this example).
It is actually impossible to post a standard letter through such a slot, without first folding it in half or screwing it up into a sort of tube. The slot is typically made of rough-cast brick or cement, and tears the edges off both the letter and your fingers as you push it through.
Imagine the fun that I have with A4 envelopes and glossy magazines! Especially when, as is usually the case, some bozo has come along the night before and has stuffed the whole thing full of advertising leaflets for cheap barbecue utensils.