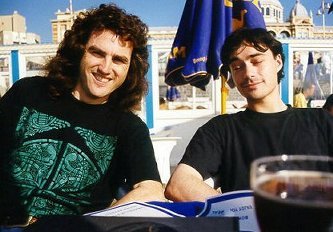 Equipped only with a couple of pocketfuls of cash and the clothes we stood in, we had one for the road in the Firkin in Utrecht, and then headed out by train and bus to the beach at Scheveningen.

The hotel from the pier

Famous for at least two things, one of which is that its name used to be used in the war to spot German spies (if they couldn’t satisfactorily pronounce the difficult “Sch”, then they were obviously not Dutch and were shot), Scheveningen has a fine beach and is the site of many events and exhibitions, such as the fabulous annual kite festival. When we arrived, we hit the tail end of a sand-sculpting exhibition, with some pretty impressive stuff from artists who had flown in from around the world to take part.

A sand sculpture. This one didn’t win first prize.

One of the advantages that Scheveningen beach has over many others is that the strand is lined with pleasant bars, so after checking out the sandcastles we had a beer or two before tackling the pier, a recently rescued structure that appears to be cobbled together from old oil platforms, although the renovations should be impressive when they’re finished.

As the sun set in the English Channel, we headed out to Rotterdam. Most of this city was flattened in the war, but what little is left of the old town is gathered around the old harbour, a backwater of the main shipping port which is home to a fleet of beautifully kept Dutch barge houseboat conversions. On one side is the new suspension bridge, and on the other, the weird cube houses.

Rotterdam Old Harbour with the cube houses in the background

We paused for a beer on the quayside, enjoying the enormous Laetitia Casta peering down at us from the side of a nearby office block (not content with building some of the most imaginative office buildings in Europe, the Dutch go to great lengths to decorate them as well), and then we moved to a convenient Belgian bar.

Looking around, we noticed two spare tables, one rickety one squashed into a corner by a bevy of young ladies on a hen night, and the other up against the window. Deeming it too obviously lecherous to squeeze in with the girls, we chose the window seat. However, not long into our first beer, another girl came over who wanted to use our table, and she bribed us with free beer if we would only move to that little table in the corner… 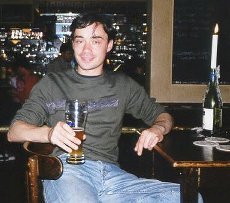 Eventually we left and went for a walk around the harbour, on a vague quest to find an all-night bar that somebody had told us about. The waterfront at Rotterdam is very pretty at night, all the bridges are brightly lit and reflected in the inky black water. However, the bar, when we finally found it, was firmly closed.

Heading back into town, we found a club called the Blue Fish that was still letting people in. It was long and thin with a long thin dance floor partway along, populated by an interesting selection of people. We were far too tired and hungry to pay much attention, but luckily they served the best cheese and ham tostis we had ever seen, as well as a small selection of bottled Belgian beers. Eventually dawn came up outside, and we tottered to the railway station to see if there were any trains going to Maastricht.

After a couple of hours well-earned kip on the train, we awoke to find ourselves somewhere completely different; Roermund, I think.

We stumbled around a bit looking surprised, narrowly avoided being thrown out of the station as vagrants, and got on a train to Valkenburg, home to Holland’s only hill. 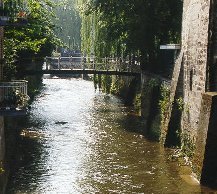 It was substantially hollowed out by the Romans, who built 70km of tunnels as they excavated building stone. Since then, its been turned into a sort of museum-cum-art-gallery, where any event in the towns history has been commemorated by either a charcoal drawing or a sculpture somewhere in the depths. It was also at one point turned into the towns nuclear fall-out shelter, although for all the impressiveness of the enormous steel doors, the sheltering townspeople still seemed to be dependent on air shafts and water from the (presumably contaminated) outside world. 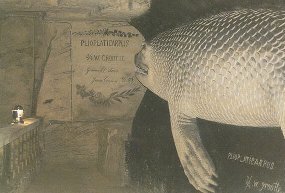 A carved dinosaur under Valkenburg mountain

Out from the bowels of the earth, we decided to climb the mountain, spurred on by the signs to a Roman spa at the top. Sadly, the spa turned out to be a hotel, but luckily there was a ruined castle so we poked around in that instead. Conveniently it had a bar, and we were able to have a restorative beer before heading back down to the town and the train to Maastricht, where we intended to book a hotel room – if only to have a shower.

On top of the world

Maastricht itself seemed quite fun, although the ugly modern bridges over the river were a disappointment… as was the fact that, due to some festival or other, all the hotels were completely full. So, after a short wander about and the purchase of some clean clothing, we headed back to the station, where a particularly lovely girl was selling coffee and waffles. Neither of us really like the really sweet Dutch waffles, but we bought some anyway, and I was delighted to be told that my Dutch accent was very aristocratic. And now, fuelled by coffee, we boarded the train to Venlo.

Thanks goodness there was a hotel by the station. We spent some time relaxing in our rooms and standing under the shower, before putting on our new clothes and heading into town.

Venlo is a curious place that caters almost entirely for German shoppers. Bar staff and shop assistants assume without thinking that you are German, and address you in that language, something I didn’t really notice until I caught Adams baffled expression and realised that I wasn’t speaking Dutch any more. 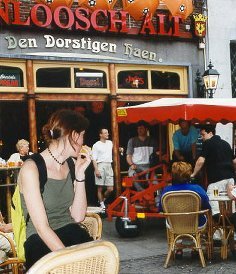 A motorised bar passes through

In the market square we found a convenient bar with the unlikely name of The Thirsty Chicken, and sat and watched the world (or to be more accurate, the girls) go by. A huge storm brew up, but although we were outside, we were sitting under a canopy and had a grandstand view of the lightning as the clouds swooped and boiled around us. Marvelous.

Later that night we headed for The Splinter, a rather off-the-wall neo-punk club near to the hotel, where I met up with Helga and Nardje for a nights dancing and drinking, while Adam wandered back into town for a quieter session. Actually, I think he just fancied the barmaids more.

After a few hours of welcome sleep, we emerged blinking into Sunday morning. The last time wed done something like this, in Groningen in the north of Holland, we’d inadvertently continued drinking all night again and had been forced to return home on the Monday morning, amongst all the suited commuters. This time we determined to hit only one more city before putting our tails between our legs, so we plumped for Nijmegen.

It was a good choice. The sun was blazing and the town picturesquely mediaeval. In the park we messed about climbing on rooves and taking pictures of the castle. 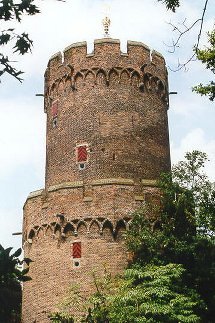 A castle in Nijmegen’s park 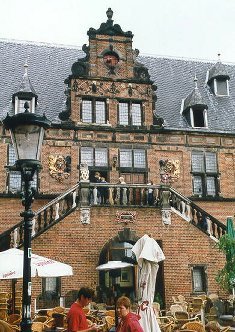 The town hall at Nijmegen, which handily houses a very nice bar

Eventually, however, we had to drag ourselves away, and after a walk along the riverfront we made our way, tired and happy, back to the station.